Let’s get one thing out of the way right off the bat: there’s more mechanical stuff in the Supra with BMW logos stamped on it than bits originating from Toyota. And that’s not a value judgment—it just is.

In the giant, formal ball that is global manufacturing, companies often look for partners that bring components to the table that fit the job description of the future car in question. So, the drivetrain, most of the suspension, the in-car technology—all of this is a made-in-Munich equation. The door plate and even the underhood components like the coil packs atop the spark plugs all state “BMW.” Hey, at least give car points for honesty. But the market has been awaiting the new Supra since the FT-1 concept car debuted way back in 2014, so the new Supra has been a long time coming.

Could Toyota have engineered a great follow-up to the vaunted 2JZ inline-6 from Supras past? Of course. Could it have done its own suspension architecture and platform? You bet. But for a very low-volume car, it’s a boardroom fight you’re assured to lose when partnering with BMW could cover virtually all the product’s needs. Whether that’s right for the fans and consumers attracted to the new Supra is another thing entirely, but car companies must live and work in the real world where R&D costs for a single platform are in the billions of dollars. Bean counters often make the decisions, and if a new platform and its costs cannot be spread across more than one product line, it’s nearly impossible to justify. If Toyota hadn’t partnered with BMW on the Supra, this car wouldn’t exist at all.

Getting past the BMW origins

The bigger enthusiast question is whether it works as intended. And that answer is certainly yes. Power from the 3.0L, turbocharged inline-6 is no less than 335hp (250kW) and 365lb-ft (495Nm) of torque starting at just 1600rpm. We state “no less than” intentionally here—there are some reports that this engine is far healthier than the 335hp rating would suggest. Plus, Toyota just announced that the 2021 car will have 380hp (283kW). When you know that the BMW Z4 M40i with the same exact engine is already rated at 382hp (285kW) in the United States, well, questions start to arise.

Regardless of precise power level, this inline-6 makes great inline-6 noises at full throttle all the way to redline. In Sport mode, it also adds some overrun popping and burbling from the exhaust on a closed throttle that some will find entertaining. [I find it entertaining—Ed.] It’s not, however, way overdone as on some other modern sports cars, like Jaguar’s supercharged V8 F-Type.

Mated to the engine is a ZF 8-speed automatic with shift paddles. Toyota claims a 0-60mph figure of 4.1 seconds, and we think that’s conservatively stated. It feels quicker. However, no manual transmission is available. It is EPA-rated at a combined 26mpg (9l/100km), with 24mpg (9.8l/100km) in the city and 31mpg (7.6l/100km) on the highway. Expect much less on track, though.

The quality of the road surface comes through loud and clear via the suspension, the seat, and the prodigious tire thrum, but actual steering feel is a touch disappointing. The center of gravity is also remarkably low, but the feeling you get when throwing the car around at the limit is actually very traditional. Here’s why.

Sitting as far back in the wheelbase as one does in the Supra, you get a strong sense of polar moment. And polar movement. Since you’re driving the car from the back half of its overall length and the axis of the car’s rotation—the yaw center—is actually in front of the driver, one feels that car rotation with even more emphasis when oversteering even slightly. (A mid-engine car imparts less of this feeling that you’re at the heavy end of the pendulum.)

This experience is akin to that of older, traditional front-engine sports cars of the 1950s, ’60s, and into the ’70s. This is not a criticism, per se, and not at all bad; in fact, it might even be more entertaining than a mid-engine car that gives equal alarm to understeer and oversteer yaw.

The Supra also feels every bit as heavy as its 3,297lb (1,540kg) curb weight. Tossing it around on a track exposes this densely packed impression. The Supra is certainly fun to drive. It’s just a bit different in today’s high-performance sports car universe when even the C8 Corvette has gone to a mid-engine layout. (For the record, we used a proper controlled environment for high-speed testing at Apex Motor Club in Arizona.)

Since the Supra defaults to a “Normal” driving mode that relaxes the engine, transmission responses, throttle responses, and damper stiffness, it can deal easily with a daily drive or a road trip, though the tire noise is always on the loud side. 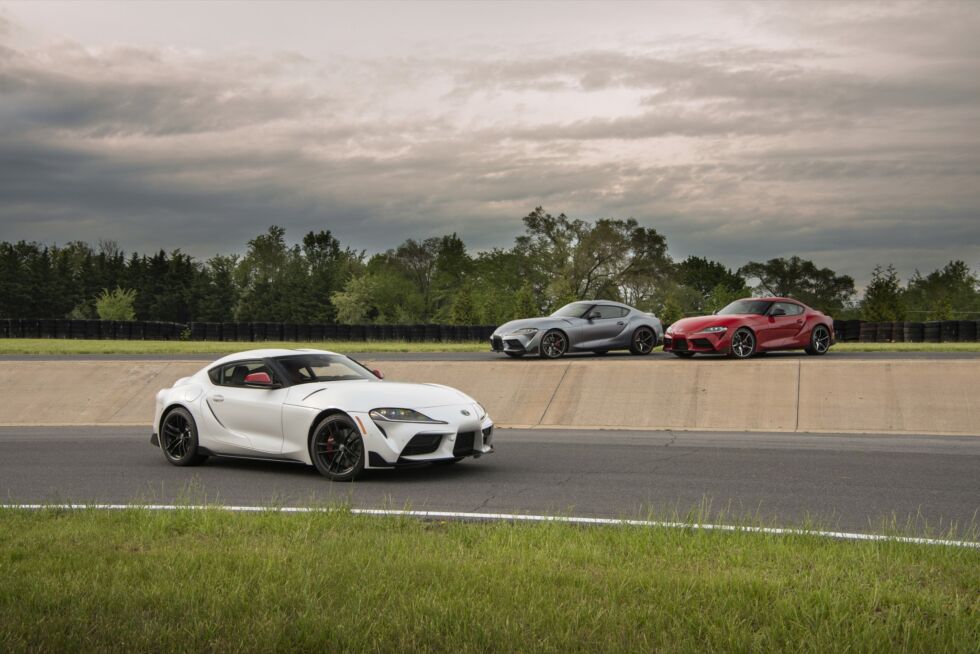 Enlarge / It comes in colors other than red.

Sports cars must look the business, and the Supra uses some cues like headlights that owe their general shape to the last-of-the-’90s Supras (known to Supra cognoscenti as the A80 model). But it also uses a ton of make-up to separate it from the BMW Z4 on which it’s built. Where the first-of-the-’80s Supras were angular, creased, and folded shapes, this new 2020 generation takes the A80-generation Supra form to an even more bean-like, hyper-organic, even bulbous place. There’s also some Toyota history here, too: the upper greenhouse and side window shape evokes the classic Toyota 2000GT of the 1960s. But most of the various grilles and air intakes at the car’s slightly F1-inspired nose are actually fake. The result is even a little bit exotic-looking, but it isn’t exactly handsome in the way the A80 Supra of the 1990s was, and it’s certainly not in the same ballpark as the classic 2000GT.

Inside, Supras of the past did sport four seats, even if the rears were cramped and unusable by adults. The new Supra chucks those marginal seats, making things a bit more honest about the car’s mission. This is a front-engine two-seat sports car in the format of older, more traditional sports cars uncompromised by rear seats like the Corvette, BMW’s own Z3 and Z4 coupes, Nissan’s Z, and, going back several generations, the hairy-chested British mounts like Jaguars, TVRs, and Austin-Healeys.

Perhaps by killing off the two rear seats, Toyota was allowed to pour that attention into the front seats, which offer lots of bolstering and support. The absence of rear seats also allows for audio system components, plus a healthy 10.2 cubic feet (289L) of trunk space, enough for two carry-on-sized bags of luggage. And the double-bubble roofline nets a lot of headroom, too. But that headroom is spoiled by a low-hanging door aperture such that anyone over about 5’10” (1.78m) will bash their head against the door opening.

Using BMW’s infotainment tech is a plus

As well as in matters mechanical, there’s a smorgasbord of BMW content in the interior, which is not a bad thing, actually. It all fits well, is fairly straightforward, and offers just enough tech to keep things current. The “Supra Command” system is an alias for BMW’s iDrive, controlled with the same central control knob as on Bavarian varieties. Navigation with real-time traffic data, the 12-speaker JBL audio system, and Bluetooth connectivity are all brought together through an 8.8-inch touchscreen (though a 6.5-inch screen is standard). Since Toyota has long had an aversion to giving customers Apple CarPlay functionality, this is a funny way of getting around that roadblock, since the system is BMW’s. Android Auto is absent.

All 2020 Supras receive active-driving features including forward collision warning with automatic emergency braking, pedestrian detection, lane-departure warning, and road-sign assist. Of particular mention is the BMW-sourced lane-keeping assist. As on several recent BMWs we tested, the assist sometimes reacts oddly and overbearingly to white lines at the edges of roads. Like a bloodhound on a bum scent, this system can get a whiff of something it doesn’t like and stays on a misread trail that requires a great big tug to keep going the way you, as an alert driver, know you need to go.

At a base price of $50,855 (including the required $955 destination fee), the new Supra certainly undercuts some other two-seat sports coupes, like Porsche’s Cayman at $58,850, and offers an entirely different dynamic feeling than a mid-engine sports car. With the technology baked in, the turbocharged engine, and the paddle-shifted transmission, the new Supra is both high-tech and traditional at the same time. Despite BMW roots. Those who dismiss it entirely because of its German platform would be missing out on some serious fun behind the wheel.

Insomnia Twitter is a remarkably unhinged yet unifying place

‘Call of Duty: Modern Warfare’ tells a story about terrorism. It’s not...

‘Untitled Goose Game’ has everyone living their best chaotic lives

Why Disney’s new ‘Mulan’ won’t be a straightforward remake

ZenMate VPN is on sale for under £2 a month

Facebook got hit with $5 billion fine, but it’s what comes next...

How to block annoying notifications on Chrome

These impressive Japanese knives are on sale for nearly 90% off

Twitter updates lists as it pushes users toward ‘interests’