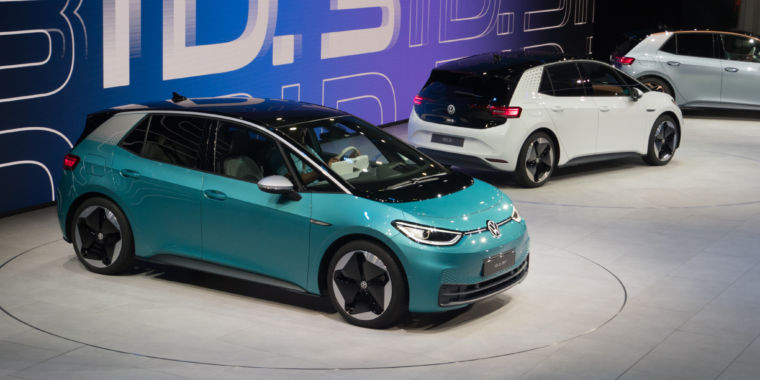 198 with 94 posters participating, including story author

FRANKFURT, Germany—On Monday night, on the eve of this year’s Frankfurt Motor Show, Volkswagen debuted the ID.3, its new battery electric vehicle. It’s the first BEV to use the company’s new modular electric architecture (called MEB), which will underpin new BEVs from VW as well as sister brands Skoda and Seat. It’s about the size of a VW Golf, and the base model will sell for around €30,000. But unfortunately for us, there are no plans to sell this particular BEV in the North American market.

In the wake of the diesel emissions scandal, VW has gone all-in on electrification, as it’s the only way the automaker will be able to meet stringent new European Union CO2 targets. To that end, the company has developed a flexible new platform for EVs, which in the past few years it’s shown off in a number of concept vehicles, including the groovy ID Buzz microbus and that wacky ID Buggy we drove last month.

Unfortunately, VW did not homologate the ID.3 for the United States or Canada, so there are no plans to bring the car to our shores. Instead, we have to wait until late 2020 for the ID.4, based on the ID Crozz concept, which shares the same MEB parts bin and tool kit but in an American-friendly crossover form factor.

Chelsea Handler talks about facing up to her own white privilege

James Corden addresses that viral footage of him not driving during ‘Carpool...

‘The Mandalorian’ chapter 2 is a perfect little Star Wars poem

Lots of gaming controllers are discounted on Amazon

This Acer Chromebook is on sale for less than $150 at Walmart...

Need more storage for your Xbox or PS4? These Fantom Drives can...